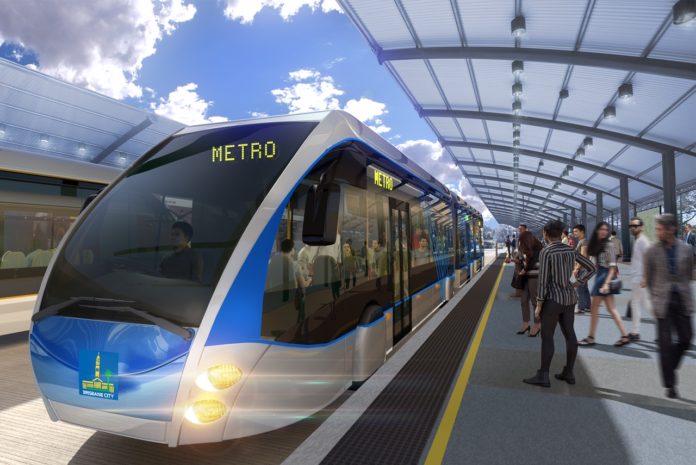 The Brisbane City Council has fine-tuned its plans for the Brisbane Metro Subway System in order to overcome some critical operational issues that it had experienced with the previous design.

The newly unveiled system is a complete departure from a metro style track-based rubber tyre system.
(The following article is taken from BrisbaneDevelopment.com – link at bottom of the page)

The vehicles will use 21 kilometres of the existing busway infrastructure with frequencies of one vehicle every three minutes in peak times and 90 seconds between Roma Street and the Gabba precinct with an aim to slash travel times by up to 50 per cent.

There will be two interchange stations connecting with the new Cross River Rail at Boggo Road and Roma Street Busway stations.

In the process of overhauling the proposal, the project’s forecasted cost has been reduced by around $500 million with the final cost expected to be less than $1 billion.

Cr Quirk said the expanded project was developed in response to extensive consultation with a focus on better integration of the Metro with the State Government’s Cross River Rail.

“Metro services will be expanded to the suburbs and will help address Brisbane’s existing congestion and capacity issues with a fast and reliable public transport service to keep Brisbane heading in the right direction,” he said.

“Right now, buses carry two out of every three public transport trips in Brisbane. Our existing bus infrastructure is already at capacity in a number of areas and cannot cope with the continued forecast growth of our city.

“The Metro improves the CBD amenity by removing 125 buses from the CBD in the morning peak hour.

“It provides a better solution for Brisbane that redirects buses to the suburbs, integrates with the proposed Cross River Rail project and connects our key knowledge and health hubs.”

Cr Quirk said the Metro would boost the capacity to carry up to 22,000 passengers per hour in the morning peak which includes existing services such as the BUZ, Rocket and CityGliders. Most other services will be truncated or rerouted with more services in the suburbs.

Under the new plan, a new underground station will be built at the Cultural Centre and the Victoria Bridge to be converted into a transit-only green bridge.

The new bi-articulated buses are said to have a passenger capacity of 150 people with upgrades to occur at each of the 18 busway stations to enable commuters to swipe on and off at the busway stations and ensure faster journey times.

Cr Quirk said Council would undertake community consultation during the next several weeks on this preferred option before finalising a preliminary business case in May.

The Brisbane City Council has changed the previous track-based metro plan to instead introduce larger bi-articulated buses which will run frequently like a metro would, along the dedicated busway.

The fact of the matter is that the proposal is not a ‘metro’, it is a super-bus or upscaled City Glider route with one new underground station and the removal of traffic lanes on the Victoria Bridge.

While this un-sugarcoated fact or perceived ‘downgrade’ to bi-articulated buses may give the impression of a watered down project, this is by no means a bad thing. The previous plan involved shutting down the whole busway system for a rubber tyre track-based metro. This style of metro can be seen in Paris, which has numerous rubber-tyred metro lines.

The difference between our busway lines and Paris’ Metro lines is that our busways cannot cater for Paris’ larger 8+ car metro carriages, some of which can hold up to 932 people each, like this Alstom MP14 Metro. It would require a huge investment to transform our busway’s gradients, station length and sharp turns into a line which would be capable of matching the capacity of Paris’ 932 passenger metro.

Simply put, this is a cost efficient way of solving a bottleneck issue on the Victoria Bridge and Cultural Centre which has been plaguing the busway system for years.

Spending less on improving mass transit for areas which already have access to mass transit is fine, provided funds are reinvested towards long-term infrastructure such as an East-West MRT line, previously suggested on Brisbanedevelopment.com which would open up Brisbane suburbs which currently have limited or no access to rail or mass transit infrastructure.

Brisbane will have to wait to get an underground metro rail line with actual trains instead if buses, however – baby steps.